A pair of Procar by SCAT Sportsman Pro seats were used in this 1970 Chevrolet Nova Yenko build featured in Super Chevy Magazine. The owner, Dave Stagliano, didn’t have the time to devote to a complete rebuild but wanted something unique that wasn’t driven off the showroom floor.

He initially wanted a ’69 Camaro but was having trouble finding one within his budget. Then this 1970 Nova came up locally at a reasonable price, and the rest is history.

When Dave went to look at the Nova, he was so fixated on what was in front of him that he didn’t really dig too deep to see if there were any issues with the car. What he ended up buying was a 1970 Nova that had already been back-halved with a narrowed Dana 60 installed. At the front it had a QA1 adjustable suspension in place, and QA1 coilovers at all four corners. Under the hood was a 454ci LS7 backed by a TH400 transmission. It appeared to have had a fresh coat of GM Sunburst Orange II Metallic paint applied, along with some Yenko-flavored stripes at some point. What he also bought was a car that had been passed along by a number of people, with no clear history of its origins. Dave did some digging and was able to find some information on the car, but was never able to track down the guy who initially had it built.

Read the rest of the article here. 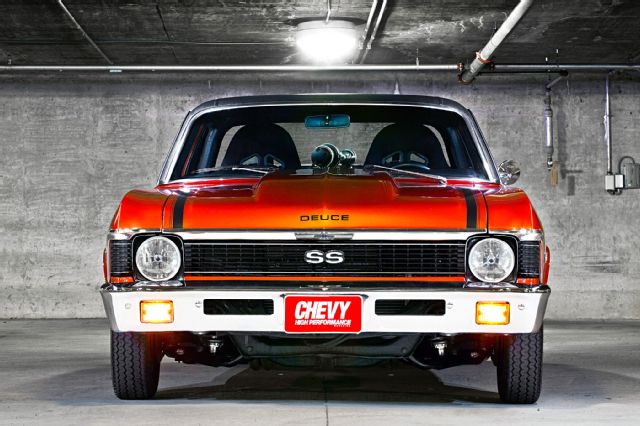 Sign up to receive our newsletter and a 5% off coupon code!